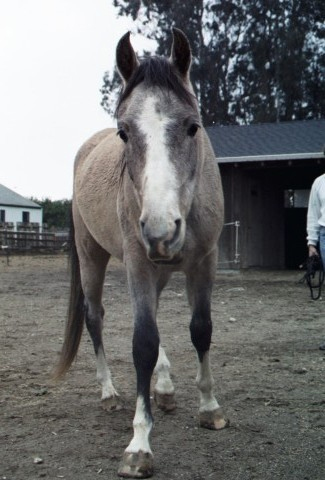 Equine cerebellar abiotrophy (CA) is a genetic, neurological condition found almost exclusively in Arabian horses. Results from breeding experiments carried out at the University of California, Davis indicate a recessive mode of inheritance for this condition. This means that a horse can "carry" the disease gene but not be affected by it. However, breedings between two carrier horses will produce an affected foal 25% of the time.

The incidence of CA in Arabians is unknown but evidence from affected foal's pedigrees indicates that the disease gene is present in popular bloodlines. Personal communications with veterinarians and Arabian horse breeders suggest that this disease affects a significant number of horses every year. Without a direct genetic test, there is no way to know how many horses are carriers or whether a particular mating creates a risk for an affected foal. Dr. Cecilia Penedo and her research team at VGL worked to identify the gene responsible for CA. In 1985, the late Dr. Ann Bowling, a renowned horse geneticist and researcher at VGL, started a small breeding herd based on carrier and affected horses donated to the UC Davis veterinary hospital. Using DNA from these horses and their offspring, as well as DNA that we collected from other small families producing CA foals, we have mapped CA to ECA2 and identified a potential causative mutation.

Foals affected with CA appear normal at birth. Around six weeks of age (although sometimes as late as four months), the disease causes the death of neurons in the cerebellum of affected foals, leading to head tremor (intention tremor) and a lack of balance equilibrium (ataxia). Affected horses may show exaggerated action of the forelegs, a wide-based stance, and be unable to rise from a reclining position. They tend to startle easily and often fall due to ataxia. The neurological problems may not be apparent to owners and are frequently thought to be a consequence of a fall rather than the cause of it. CA symptoms vary in severity. Some foals show very severe symptoms, including the exaggerated gaits and a dramatic lack of balance. Others have little more than the head tremor, which may only manifest itself during goal-directed movement. Regardless of the severity of the symptoms, CA foals are often euthanized or restricted to life as pasture pets, as they are never coordinated enough to be ridden safely. They are also a danger to themselves because the condition predisposes them to accidents and injury.

Veterinarians can perform a series of neurological tests to determine if symptoms are consistent with CA.

Positive diagnosis of CA is only possible through post-mortem histological examination of cerebellar tissue. The photos below contrast the cerebella of a normal and an affected horse (an affected subject in our CA genetic mapping resource).

The normal cerebellum is divided into two layers: the inner layer, known as the granular layer, and the outer layer, known as the molecular layer. Purkinje cells are large neurons that lie on the border between these two layers. They carry electrical signals from the molecular to the granular layer, where the signal is then transmitted to the body. They carry all messages generated by the cerebellum and have control over the refinement of movement and coordination.