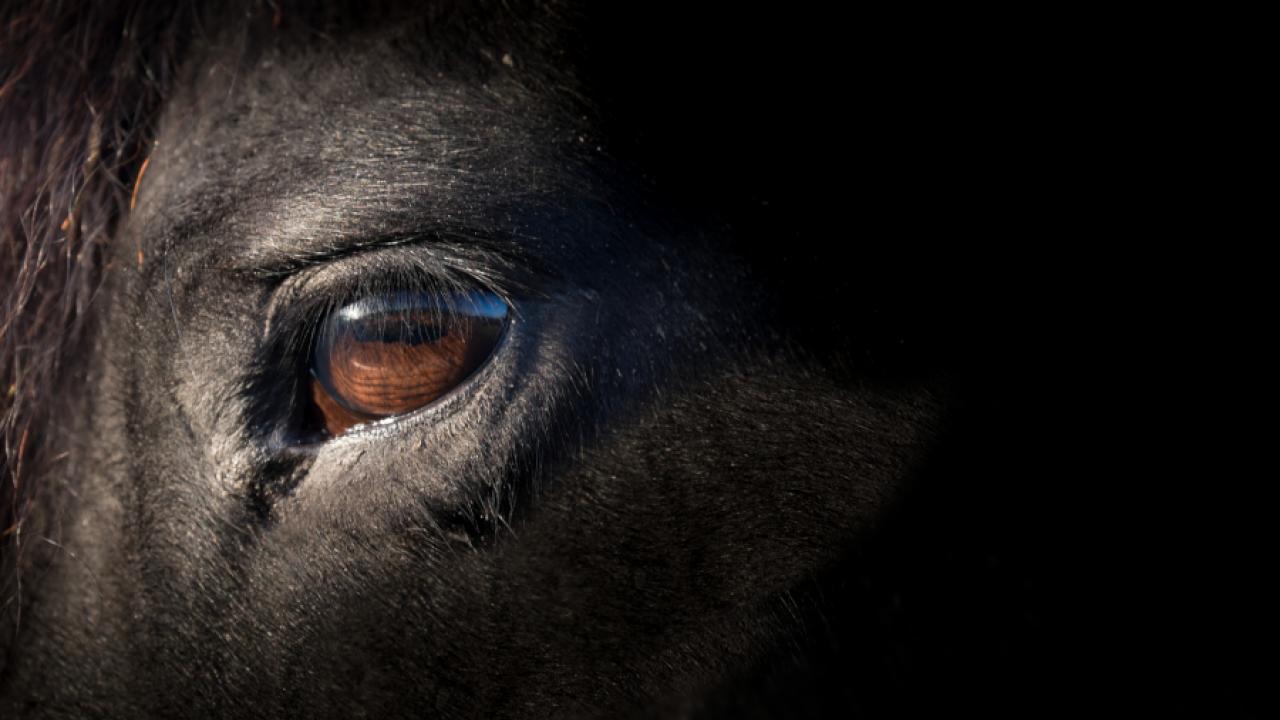 An interdisciplinary team led by VGL Director Dr. Rebecca Bellone identified a genetic variant associated with distichiasis in Friesian horses. The study, published this month in the journal BMC Genomics, marks the first identification of a genetic variant linked to equine distichiasis, an ocular disease characterized by eyelashes that grow from abnormal positions along the edge of the eyelid and often lead to irritation and damage to the cornea (the clear outer "windshield of the eye"). The VGL has also developed the first genetic test for this disease-associated variant in Friesians.

"This test is the third DNA test available that is specific to Friesian horses, the other two being dwarfism and hydrocephalus. These DNA tests can be used to assist in mate selection to breed for healthier horses," said Dr. Bellone.

In typical mammalian eyelids, glands called Meibomian glands line the edge of the eyelid and secrete oils that help prevent evaporation of the eye's protective tear film. Distichiasis occurs when aberrant eyelashes emerge from the orifice of the Meibomian glands, which puts the misplaced eyelashes in a position where they may come in contact with the cornea and cause irritation to the surface of the eye. In some individuals, the disease may be mild enough to go unnoticed, but in other horses these abnormal lashes can cause chronic irritation, ocular pain, and corneal ulcers. Damage to the eye from corneal ulceration may cause vision loss or necessitate removal of the eye.

Congenital distichiasis has been described in several species including humans, dogs, and horses. Among horses, distichiasis has been most commonly documented in the Friesian breed. This predominance of Friesians among the reported cases tipped off researchers that there may be a genetic basis for the disorder.

The current study used a mix of traditional and modern tools to investigate the genetic basis of equine distichiasis. Basic pedigree analysis (tracing the family trees of affected Friesians) in conjunction with a Genome Wide Association Study (GWAS) yielded evidence of an autosomal recessive mode of inheritance. Researchers honed in on one chromosome, ECA13, where a particular locus was found to have genome-wide significance. Using whole genome sequencing to investigate this region further, the authors identified a large chromosomal deletion, located in a region between two genes on ECA13, that was strongly associated with distichiasis. The variant was found to have a moderate frequency in the breed of 32.3%. What this means is that an estimated ten horses in a hundred will be homozygous for this variant (that is, will possess two copies of the variant).

Additionally, equine data from the Functional Annotation of Animal Genomes (FAANG) project allowed researchers to assess potential gene regulation of this region, which could provide clues about how the deletion impacts gene function and subsequently leads to the disorder. This is the first time the FAANG histone ChIP-seq data has been used to investigate hypotheses related to intergenic (between-gene) regulatory regions of the genome, illustrating the value of such datasets for future research.

"We can now use these functional annotation data to develop hypotheses about gene regulatory regions that we can test in our future studies aimed at untangling the functional mechanisms of the deletion that leads to the development of these aberrant eyelashes," said Bellone.

Eighteen out of the 19 affected Friesian horses in the study had two copies of the identified chromosomal deletion. There were also seven out of 75 horses that did not have any evidence of distichiasis that had two copies of the deletion. Based on these results, the researchers hypothesize that distichiasis in Friesians may be an incompletely penetrant trait; that is, the condition may be expressed in only some of the individuals who are homozygous for the trait-associated allele while some individuals homozygous for the deletion may never express the trait.

"Given the strong association and the frequency of the variant in the population of Friesian horses we evaluated, testing for this variant can be used to avoid crosses that can produce animals homozygous for the variant (Dis/Dis)," said Erin Hisey, the UC Davis veterinary student who was the first author on this study. Additionally, the results of this test can be used clinically. "Those horses that test homozygous for this variant (Dis/Dis) should be evaluated for abnormal lashes to potentially provide clinical intervention prior to the development of irreversible corneal damage," said Dr. Hanneke, co-author of the study and equine surgeon with a focus in ophthalmology.

Bellone concluded, "this is an exciting research story, not only because of the exceptional international and interdisciplinary team of equine geneticists and clinicians that enabled the success of this project, but also because this project was integral in the training of a very talented student, Erin Hisey, who can utilize the knowledge gained through this project to advance horse health for many years to come."

This work was supported by the UC Davis Provost Undergraduate Research Fellowship, the Morris Animal Foundation, and the UC Davis Center for Equine Health.

Erin is currently a second year veterinary student in the DVM/Ph.D. program at the UC Davis School of Veterinary Medicine.